Valentine’s Day is right around the corner. For many couples it’s an evening featuring a romantic dinner, perhaps some candlelight, soft music in the background, and then of course, the main event. Moving things into the bedroom for a night of passion and sensual experience, usually makes for a deliciously perfect conclusion to any Valentine’s Day. This particular holiday, as most understand, is synonymous with intimacy and getting ultra-close to the one you love to spend time with. So what do you have planned for this Valentine’s Day?

For some couples, it could be that they are looking to spice things up, forego the same-old same-old for an adventurous night of unbridled lust. What better occasion to take things up a notch between the sheets than a day specifically designed for celebrating love and romance?

The thing with introducing role playing into the boudoir is that it gives couples the chance to let their inhibitions go by providing a fun and still erotically-charged way to explore different sexual scenarios. Some couples however may be intimidated by the prospect of bringing role play into the bedroom. There really, though, doesn’t have to be any intimidation factor involved—especially if you have an open and honest discussion beforehand about what you want, what the expectations are, and how you may be feeling, be it nervous, excited, anxious, aroused, you name it. Nothing should be off the table when it comes to discussing your role-playing fantasies.

Fantasies are just that…fantasies. There is no right or wrong answer here. As long as you’re with the right partner, one whom you trust and can be open with, there should be no judging involved as far as fantasies go. Keep in mind, when it comes to sexual fantasies, sometimes people do tend to imagine scenarios and interactions that aren’t all that common. Again, no one is judging.  And if the person you’re with is judging, well, perhaps that’s not the right partner for you. Role play can be about digging deep and exploring what it is you desire at a very raw and unconstrained level. 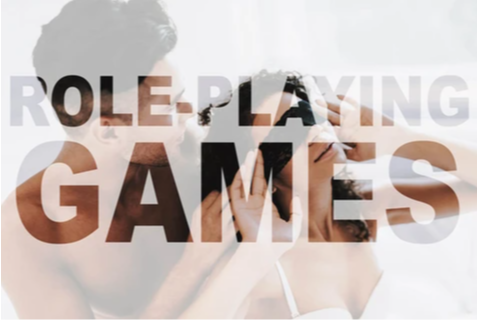 That is not to say that all role play has to involve costumes and/or props. This is where that initial open and honest conversation comes into play. For some couples however, role play isn’t role play unless there are outfits and toys involved. If you and your significant other fall into this category, then you may want to do a little shopping in preparation for your Valentine’s Day night of erotica and ecstasy.

While some opt to do their “adult” shopping in person, more and more people are going online to fulfill their sexual fantasy needs. There are a ton of sites that cater to the role-playing afficionado—from spicy and exotic lingerie, to French maid costumes, to costumes lending themselves to more specific scenarios (think doctor/patient, school girl/professor, rock star/groupie), if you can fantasize about it, odds are pretty good you can find it. There are also sites that specialize in fetishistic role-playing accessories. Don’t be afraid to express your deepest desires and role-playing needs, whatever they may be.

Think of the build-up, the anticipation of it all, the way in which the two of you carefully play the parts in all of their pent-up sensuality. Role playing is not usually about just tearing each other’s clothes off and going at it—though that’s not to say that can’t be fun as well. Rather, it is about a type of mating dance if you will, one that has the capacity to create a sexual tension like you wouldn’t believe.

Go Easy on Yourselves

If you and your partner have never really role played before, keep in mind that it may take some practice. And this is one type of practice that, let’s just say, can be quite fun as you work to perfect things! You are bound to fall out of character. That is okay. Remember, there is no judging when it comes to role play. You should feel absolutely safe with your partner in trying your roles on for size—not to mention, trying anything else on for size that may be a part of your selected scene.

And just because it may be Valentine’s night doesn’t necessarily mean that the two of you have to enact the finale of some Harlequin-inspired romance without flaw. Sometimes the mistakes made can be just as fun as the script adhered to.

Can buying sexy lingerie boost your confidence in the bedroom?

5 Ways to Power-Up Your Orgasms

Be the first to comment.
✕
Thanks for contacting us! We'll get back to you as soon as possible. Thanks for subscribing